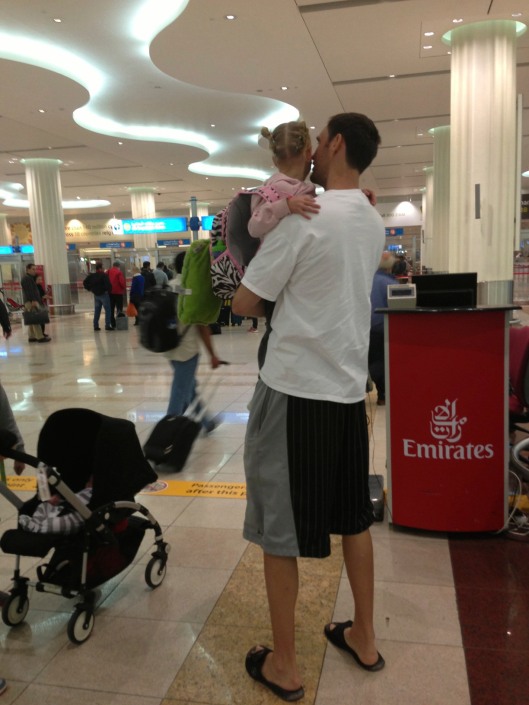 Usually it’s just Chris saying goodbye to everyone else.  This time I had to give one more goodbye hug and kiss than usual.  After a lot of thought, discussion, and prayer, Chris and I decided it would be a great thing to have Beckham stay in Abu Dhabi with Chris.  I know that a lot of people won’t understand this, and think I might be a bit crazy as a mom to do this… but that’s OK.  We feel that this decision is what is best for our family right now and that’s what is important.  During our month’s stay in December we worked out all the details for the help that Chris will need to take care of him while he is working.  He will be attending a day care from 8:00-2:00 three days a week to give him some social time with other children and also give Chris some extra time to rest as well as get schoolwork done, etc.  Even though I knew it would be hard to leave him there, I felt great about the day care and about the nanny and know that Jenn Florentin, my new great friend, will help make sure he is taken care of and give him lots of momma hugs.  Beckham craves attention and he will get a lot being there with Chris.  I’m excited for the father/son bonding time that will be available and know Chris will do a great job with him.

We left the Florentin’s house to go to the airport at 4:30 AM so we left him sleeping at the house with Jenn while Chris took the rest of us to the airport.  Therefore, I gave my Becks goodbye snuggles and kisses the night before when I put him to bed.  I held him extra long and didn’t want to let go.  He eventually reached for the bed and wanted in, so I reluctantly let go and rubbed his back some more.  I finally let go and left him knowing he was in good hands.  So far I just keep feeling like I’m missing something.  Because I am.  I miss my chunky little monster so much already, but am so happy that he’s with his dad and so happy that Chris has the chance to be with him.  It will be months before I see them both again and that’s hard to swallow, but I just know it’s right and that it’s good.

I will miss my little man so much.  Chris will have to send me pics every day. 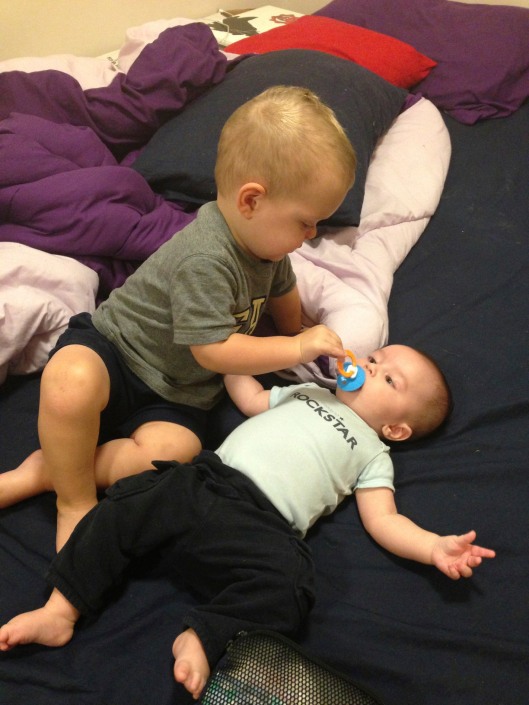 Beckham and his dad.. quite the pair

I love my big boys and can’t wait to see them again… whenever that may be.

Our trip home this time consisted of 2 legs.  One was a flight from Dubai to Los Angeles which just happens to be #5 on the list of world’s longest flights, only 1 hour less than #1 on the list.  It totaled 16.5 hours.  It was LONG.  Our flight from SLC to Dubai we flew East.  Then this time, our flight from Dubai to LA we again flew East.  So… in the last month we technically flew all the way around the world.  We then had a long layover, which ended up being a good thing because one of our bags didn’t make it and it was 2 hours after we landed when we finally cleared customs and were headed to our next gate.  We had to go through security again, which took it’s normal amount of forever.  Then at the American Airlines desk there was an issue because of the whole changing of paper tickets on our way over, blah blah blah, what’s new.  We made it on the flight which was only 1 hour 45 minutes and finally made it home 27 hours after leaving.  Now to conquer jet lag once again.  Love it.  Hopefully tomorrow my lost bag shows up somewhere.  Inshallah!