The day after Christmas it was time to make the trip back to Abu Dhabi.  We got everything packed up and loaded in the van and drove away from our little paradise.  Nobody was looking forward to the trip, but all I could think was ‘at least it won’t be as bad as the way here’.  I should have realized that very thought was just like the obvious foreshadowing that you see in scary movies.

I also failed to mention that Chris had not been feeling well and woke with a fever.  He felt dizzy when he tried to do anything but lay down.  Therefore, I would be driving.  Uugghh.  He laid his seat back and practically squished Ava, but luckily after a few hours he would start to feel a bit better.

The highway in Oman was under a lot of construction which led to a lot of traffic and diversions.  We stopped for gas before getting to the border so that we didn’t run into the same problem that we did before.  We came to the Oman border control and for some reason had to go inside once again and do some paperwork with our passports, but after getting things stamped and receiving a magical little square piece of paper that said we were good to go, we made it through and were on our way to the UAE border control.  Chris made the wise and obvious decision to take a different route… one that had nothing to do with Truck Road.

We finally made it to the Oman border control.  I was hoping we wouldn’t have to get out of the van because after listening to Beckham scream the last few hours he had just fallen asleep.  Little did I know we would be stuck there for 3 hours.  To make a long story short, residence visas have to be canceled when you leave the country.  3 years ago when we lived in Dubai we all had residence visas.  They were not canceled.  That was the issue.  So after some back and forth, and calling the airport, and once again waiting for papers to be made up, signed, faxed, etc. etc. etc. the issue was finally taken care of.  Everyone was out of sorts and it was a VERY long 3 hours.

The buildings that Chris was in for a few hours trying to get us across the border. 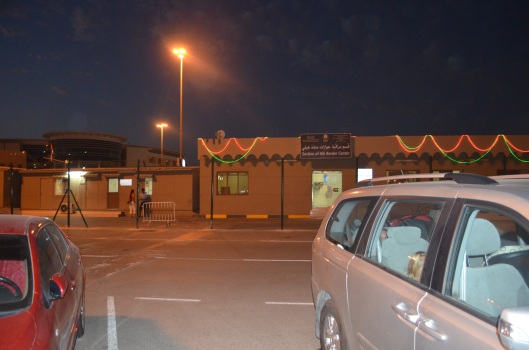 Notice the barbed wire fence.  It kind of felt like we were being held hostage for a bit.

The kids fought and whined but did find some things to do to pass the time… once again I was happy I was prepared with plenty of snacks.

It felt like the moment would never come, but it finally did.  Everything was cleared up and we were free to enter the country.  Luckily the last couple hours of our trip were on fabulously open and empty freeways.  After an even longer day than the first (9.5 hours), we were finally home in Abu Dhabi.

So in short, our Christmas vacation was 2 awesome days in paradise sandwiched in between 2 horrific days of travel.  If I would have known what it was going to be like, I’m not sure if I would choose to do it again or not.  Either way, it was a very memorable Christmas vacation, and is just one more story to add to our book of crazy adventures over seas.  On the bright side, I’m so thankful to have the opportunity to have experiences like these and see all kinds of places across the globe.